A research project carried out by the Department of Botany and Plant Physiology of the University of Malaga, together with that of the Institute of Subtropical and Mediterranean Horticulture ‘La Mayora’, and the IFAPA of Churriana, has made it possible to improve the technique to obtain a strawberry variety with a longer shelf life. The strawberry obtained has a skin with greater consistency, which improves its preservability and, therefore, its shelf life in stores.

The research has been carried out with the Chandler strawberry variety, which facilitates the obtainment of new features. “This is a biotechnological tool that has several practical applications, from obtaining new plant varieties with improved characteristics, to gene editing, which would allow us to obtain edited, but not transgenic, plants,” explains the researcher from the University of Málaga José A. Mercado.

Due to the complexity of the technique, it is the first time that experts work with strawberry protoplasts since the 1990’s. The process that researchers have followed to obtain the protoplasts starts by incubating leaves in an enzymatic solution that degrades the cell wall. The cells, already uncovered, are purified and incubated in a sterile medium with plant hormones. The new wall regenerates within a few hours and, if the cell is viable, it creates a mass of cells with no defined shape. Lastly, the researchers facilitate the formation of organized structures – small stems – that acclimatize in the greenhouse so that they can be evaluated.

The protoplast that the experts obtain with their new protocol also makes it possible to merge two similar species, giving rise to a third; a hybrid with advantageous characteristics. It is also possible to use it for gene editing, for example, by canceling a gene to improve it. “These cells can be edited without introducing another gene; that is, we would obtain genetically edited plants from their own genetic material; therefore, it would not be transgenic,” says the researcher at the University of Malaga.

The next phase of the project will focus on the development of the gene edition of protoplasts to regenerate modified, non-transgenic plants. Specifically, experts will focus on the gene linked to the fruit’s post-harvest shelf life. “We have already found that its inactivation leads to the production of firmer and slower rotting fruits,” says Mercado. 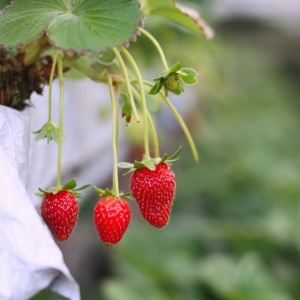 Peru could surpass Chile as the world’s largest blueberry exporter in...