Berries Australia Limited is a joint venture between Australian Blueberry Growers’ Association (ABGA), Strawberries Australia Inc (SAI) and Raspberries and Blackberries Australia Incorporated (RABA). The initiative has resulted in a new proprietary company, limited by guarantee, and managed by a board of directors appointed by the shareholders (ABGA, SAI and RABA).

Berries Australia now represents the single biggest fresh produce line in our supermarkets and our combined value is more than $1 billion. The peak berry industry bodies (ABGA, RABA and SAI) still exist and each has two Directors on the Berries Australia Board, with Peter McPherson as the independent Chair. 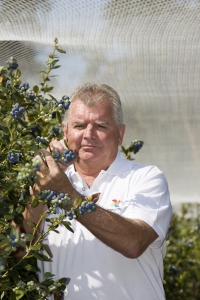 Peter McPherson has been General Manager of the Costa Berry Category (formerly known as Berry Exchange and Blueberry Farms of Australia – BFA) since 1986. His vast experience managing large-scale horticultural operations has played a key role in the steady growth and success of Costa’s berry operations.

In July 2016 he was elevated to the position of General Manager – Berry International. Peter has been instrumental in the successful expansion of the berry business internationally, including blueberry operations in Morocco, the establishment of Costa China operations, and the expansion of company blueberry genetics licensing around the globe. Complementing his commitment to Costa’s berry business is Peter’s passion for product and industry improvement. Peter sits on many company and industry boards. He has held the roles of Treasurer and President of the ABGA, and Treasurer for the International  Blueberry Organisation (IBO), and in September 2016, he was honoured to be elected President of the IBO.

Berries Australia Board of Directors

The Chairman’s Report from the latest AGM is available here.