Western Australian growers want better information on management practices and performance of new varieties to accompany their commercial release to minimise losses from trial and error. At the same time they are concerned about declining rainfall and the need to irrigate more efficiently to preserve their water resource, reduce costs and minimise fertiliser pollution of groundwater. This project was conceived to meet these needs.

A ‘model farm’ was established on a leading grower’s property at Wanneroo on the northern outskirts of Perth to demonstrate new varieties and production methods to local growers on a commercial scale that they could relate to. Some of the new electronic technology used for monitoring and managing irrigation used on the ‘model farm’ was also introduced to growers and tested on strawberry farms in W.A.’s second largest production district on the south coast near Albany.

New varieties were tested under a range of irrigation and nutrition regimes at the model farm in three consecutive seasons. Times of planting and crop covering methods – including greenhouses and low plastic cloches were compared in combination with the other treatments. The minimum size for each treatment plot at the site was 1250 plants, and each year approximately 60,000 plants were planted at the site comparing up to 48 different management practices. This enabled all fruit from the site to be marketed and a true commercial comparison of the new practices made.

Varieties and other treatments tested changed each year on the basis of the previous year’s results. Field days were held on a monthly basis during the harvest season from August to November each year, to show growers how the various new methods and varieties performed over time.

The work showed the potential of the new variety Camino Real for WA conditions as well as the yield advantages of early April planting with ‘green leaf’ plants and covering with high plastic tunnels. Irrigation and fertigation applied multiple times daily throughout the crop’s life according to a pre-determined formula was shown to reduce water and fertiliser wastage while achieving very high yields. A fertiliser schedule that applied 2 kg/ha of  nitrogen per day in a fixed ratio with other nutrients throughout the crop’s life maximised marketable yields for all varieties tested. Rates as low as 1.5 kg/ha per day (N) were sufficient for some varieties and situations. 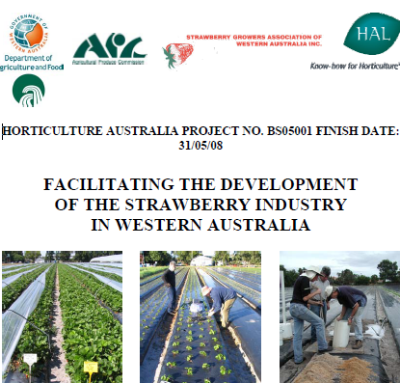 The financial assistance of Horticulture Australia and voluntary contributors including the WA Strawberry Producers Committee, Toolangi Certified Strawberry Runner Growers Co–operative and the Department of Agriculture and Food WA is gratefully acknowledged.

The authors also wish to thank the WA Strawberry Growers Association and Norma Radich in particular for managing the project and facilitating field days. The contribution of Shane Trainer (formerly from DAFWA) with the work at Albany was invaluable to the success of the project, as was the participation of growers, Neil, Norm and Len Handasyde as well as Wesley Tweedie.

Des Mahoney from T Systems Australia is thanked for his contribution of expertise and materials in Year 3 of the project.

BS15002/3/4: Facilitating the development of the Australian Strawberry Indu...

BS12025: A focus on irrigation and fertiliser practices to improve production...
Scroll to top